I had a feeling Aaron Rodgers would not be playing on Sunday when, on Saturday night, a cab driver told me he had given Rodgers a ride home from the bar the night before. In possession of a ticket for Green Bay’s regular season finale for months, I had been hoping to witness perfection, but the Packers’ Week 15 loss ended that possibility.

At the very least, I figured I’d get to see Rodgers, the frontrunner for the league MVP, flash his patented discount double-check once or twice, even if it wasn’t en route to a 16-0 season. But with the No. 1 seed in hand, Rodgers rested, and a potentially historic game turned into a meaningless one.

As I found out, there’s no such thing as a meaningless game at Lambeau Field.

How did I, a New Yorker with a strong dislike for cold weather, end up at the most iconic stadium in the NFL on New Year’s Day? In short, I got a ticket from my girlfriend.

In long, Megan is from Iron Mountain, a town in Michigan’s Upper Peninsula known as the hometown to Michigan State basketball coach Tom Izzo and former NFL head coach Steve Mariucci. Green Bay is two hours south; Detroit, and the Lions, are nine hours away. Megan’s grandfather is a die-hard Packer backer with four season tickets. He got on the waiting list in 1963, on the day he returned from his honeymoon. The man who took his request said he’d celebrate his 30th wedding anniversary before he got off the list. It wasn’t hyperbole. In 1988, the year of his 25th anniversary, Megan’s grandpa got his tickets.

He has attended every season opener since, and usually one or two more games throughout the season, though in recent years he has given more tickets to his children and grandchildren once the weather gets really cold. He can’t remember the last game he didn’t watch, either in person or on television, despite recommendations from doctors that his blood pressure would be better off if he didn’t. He compromises by hooking up to a blood pressure monitor while he watches and using a stress ball to relieve tension during critical moments. Thanks to the Packers’ success, the monitor has stayed on the shelf a lot the last two seasons.

For the January 1st game against Detroit, he was kind enough to give his four tickets to Megan, her parents, and me.

On Saturday afternoon, we made the drive to Green Bay, through towns where the residents leave their doors unlocked while on vacation. The trip included stops in Lena at Kugel’s Cheese Mart—where, in addition to edible products, foam cheeseheads are sold—and the Hunter’s and Fisherman Bar, where I not only saw the head of a 1,500-pound Alaskan moose, but met the man who shot it.

We rang in the new year at Stadium View and Anduzzi’s, two bars within shouting distance of Lambeau. (I must say, New Year’s Eve outside of the eastern time zone is a bit dull—the television stations show the ball drop in Times Square at 11:00 pm local time, then replay it an hour later.) I met several Packers fans who, like everyone I had spoken to in the Upper Peninsula, said there was nothing like “the Lambeau experience.” Former Packer Desmond Howard recently told me Lambeau was a “special” and “unique” place, trite adjectives for most stadiums, but words with real meaning here, or so they say.

Before we got out of the car in the stadium parking lot, I started to understand. Green Bay is more like a college town both in size and feel. With a population of 104,000, it is easily the smallest professional sports market in the U.S. The next biggest NFL city, Buffalo, has more than twice the number of residents. Lambeau fits nicely into the city streets and is lined by one-story homes. The pre-game tailgate resembles what I experienced at the University of Michigan more so than what you’ll find at most pro stadiums.

The locals said it was “warm,” which meant it was 30 degrees and windy with light snow at kickoff, the definition of “blustery.” With sufficient clothing—I wore approximately 18 layers—I’ll admit it wasn’t that bad. The Frozen Tundra certainly could have been more frozen given the time of year.

If you squinted and scanned the 70,000 fans, two colors would stick out: yellow, because of all the cheeseheads, and bright orange, known as “Hunter’s orange” because hunters wear it in the winter, apparently so they shoot animals and not each other. A few dressed in it from head to toe looked like prisoners.

On the sidelines, students from local colleges, UW-Green Bay and St. Norbert, serve as cheerleaders. They dress like cheerleaders, not strippers.

They didn’t have much to cheer about at the start of the game. Instead of Rodgers, it was back-up quarterback Matt Flynn who trotted on to the field for Green Bay’s opening possession. In fact, the players whose jerseys are most popular among fans did not play: Rodgers, Jennings, Matthews, Woodson, Starks.

Early on, the second stringers looked like a Junior Varsity squad. The opening kickoff was mishandled and almost resulted in a Detroit touchdown. Flynn fumbled on the fourth play from scrimmage and Detroit turned it into seven points. Green Bay botched the ensuing kickoff and was called for a safety. The Lions’ playoff seed was still in doubt and they certainly played like the hungrier team at the outset.

But Green Bay wasn’t without all its stars. Wide receiver Jordy Nelson was out there, and he caught three touchdown passes. Running back Ryan Grant was, too, and he took a screen pass 80 yards for a score.

But the reason the Packers overcame six separate deficits was Flynn, who became a multi-millionaire in front of our eyes. In only his second career start, Flynn etched his name in the illustrious Packer history books. After throwing for 480 yards and six touchdowns, it is Flynn, not Starr or Favre, who holds these two major Green Bay single-game passing records. And he is a free agent after this season. 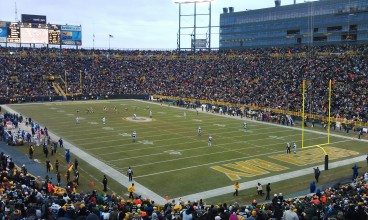 Flynn’s final touchdown strike came with 70 seconds left, and when Detroit’s Matthew Stafford (who threw for 520 yards and five touchdowns; the first time in NFL history that opposing quarterbacks threw for 400+ yards and 5+ touchdowns) was intercepted, Green Bay had a 45-41 victory. It was the 21st straight loss for the Lions in the state of Wisconsin.

Green Bay’s back-ups showed they could score, though without Woodson and Matthews the NFL’s worst defense, statistically, didn’t look Super Bowl-ready. The best tackle of the day came from Packer linebacker Brad Jones, before the final kickoff, when a young fan ran onto the field. With Lambeau security uninterested in stopping him, Jones took it upon himself and body-slammed the fan to the turf.

Jones better hope the fan was not one of the more than 100,000 who owns stock in the team, or he may be in trouble. The Packers are the only publicly-owned professional sports team in the country. For $270, fans can claim ownership of the franchise. In reality, the purchase gets you a certificate and the right to appear at the annual shareholders’ meeting. That’s it. Despite the lack of benefits, the Packers’ current stock sale is expected to net $70 million. After the initial 250,000 shares were snapped up quickly, Green Bay decided to put another 30,000 shares up for sale this spring.

In the age of personal seat licenses and tax-funded stadiums, Green Bay fans are willing to pay for stadium renovations in exchange for a piece of paper. Think that would fly in New York or Philadelphia? Many NFL teams provide lavish tours to corporate big-wigs in an attempt to sell luxury suites. The Packers have more than 80,000 people on their season ticket waiting list.

The Lambeau parking lot will certainly be more full next Sunday than it was last Sunday. The crowd will be as rowdy at kickoff as it was late in the 4th quarter. But I don’t feel like my experience was cheapened. Everyone was right. Lambeau is special. The Packers are unique. I’ve got a cheesehead to prove it.

5 thoughts on “Pilgrimage to Lambeau Field”