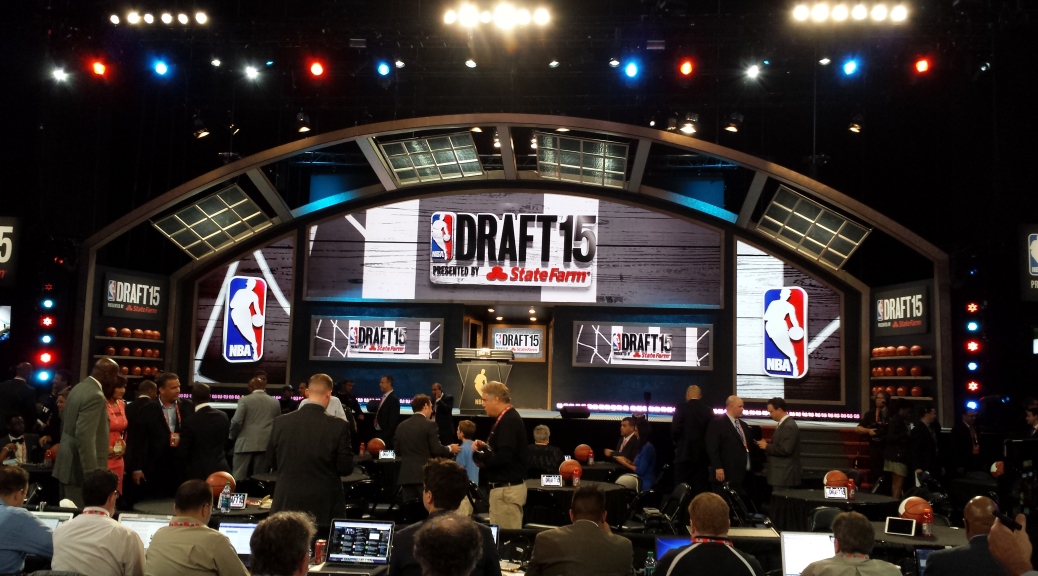 In the hours leading up to Thursday night’s NBA draft, many of the top prospects will be in hotel rooms watching TV analysts speculate where they’ll spend the next few years of their lives. The “experts,” like the players themselves, have little concrete information. One thing is certain: As much as the players dreamed about this day, by Thursday afternoon they just want it to end.

END_OF_DOCUMENT_TOKEN_TO_BE_REPLACED

Just as I’ve done the past two years, I shadowed a player at the NBA draft. This time it was Wisconsin’s Sam Dekker, who was drafted in the first round by the Houston Rockets. Part profile, part draft day diary, my story appears on the Wisconsin alumni website. There will also be a shorter version that appears in the school’s alumni magazine.

Nik Stauskas (second from right) with the rest of the top prospects and commissioner Adam Silver.

I know it’s been a while since you’ve heard from me, but I’ve been keeping myself busy with plenty of freelance writing. On Thursday, I shadowed Nik Stauskas at the NBA draft, just as I’d done with Trey Burke the year before. Stauskas was drafted by the Sacramento Kings at No. 8, higher than he was projected in any mock draft I saw. It was a fun day, and I wrote about it for Michigan Today. The story was published yesterday.

Before the draft, I collaborated with friend Nick Williams on a statistical analysis that shows why drafting centers is unwise. That ran on Sports on Earth last week.