The game ended and I had the urge to go to Citi Field. That’s where Johan Santana had just thrown the first no-hitter in New York Mets history, and I felt I should be there. It was like a pilgrimage, if a pilgrimage can include the subway. I took the N train to Queensboro Plaza, transferred to the 7, and rode the 13 stops to Mets-Willets Point. I wasn’t quite sure what I’d do when I got there.

As it turned out, I walked around the stadium, took a few pictures, and looked for discarded ticket stubs (I didn’t find any, though it was so windy that any that had been left outside the stadium may have blown halfway to Westchester). I heard a couple of guys talking about their co-workers who had left the game early because of the weather (too windy for them?). A vendor was selling, in his words, “no-hitter programs” for $5. They sell programs for each series, not each game, and $5 wasn’t a post-game discount, so if I want one I can get it tomorrow, when I’ll be there for the game. Of course, I wish I had been at this one.

END_OF_DOCUMENT_TOKEN_TO_BE_REPLACED 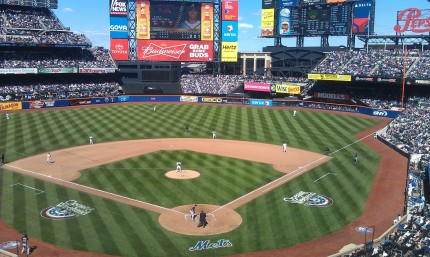 The Mets opened the 2009 season in Cincinnati against the Reds. The theme of the previous offseason was the bullpen—the Mets signed Sean Green, J.J. Putz, and Francisco Rodriguez to pitch the seventh, eighth, and ninth innings. On that day in Cincinnati, Johan Santana pitched 5.2 innings before handing it to Green, who gave way to Putz, who gave way to K-Rod. The Reds didn’t score against the relievers and the Mets won 2-1. It had gone exactly as planned, and all the post-game talk was about the Mets’ rebuilt bullpen. Of course, not all of the remaining 161 followed that script, and the Mets finished 70-92.

The theme of this past offseason was, well, financial problems, but as far as player acquisitions it was once again the bullpen. The Mets traded for Giants reliever Ramon Ramirez and signed free agents Jon Rauch and Frank Francisco, both with Toronto last year. Yesterday, on Opening Day at Citi Field against the Atlanta Braves, Santana pitched five scoreless innings. Ramirez relieved him, Rauch and Francisco each threw a scoreless frame, and (with the aid of two big outs from Tim Byrdak) the Mets bullpen preserved the 1-0 win. (As a bonus, the only starting position player acquired this offseason, Andres Torres, scored the game’s lone run.)
END_OF_DOCUMENT_TOKEN_TO_BE_REPLACED 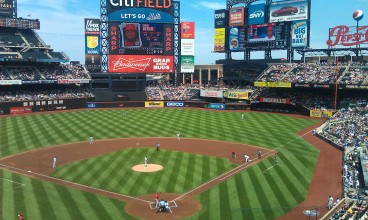 It’s been a few years since I felt good about the New York Mets heading into the season and even longer since I felt good about them once the season was over. Expectations are especially low heading into tomorrow’s season opener. If you’ve read anything about the Mets in the past 12 months, you’re aware that the team’s owners lost a fortune as a result of Bernie Madoff’s Ponzi scheme. Ticket sales plummeted as the Mets finished 77-85 last season, fourth in the National League East, only adding to their financial woes.

As a result, the Mets orchestrated the biggest payroll slash in MLB history, going from $142 million to $91 million. They traded two of their stars last July and didn’t offer a contract to free agent Jose Reyes, who signed a nine-figure deal with the rival Miami Marlins in December. New York made no major acquisitions. ESPN the Magazine predicts the Mets’ best-case scenario is not losing 90 games.
END_OF_DOCUMENT_TOKEN_TO_BE_REPLACED