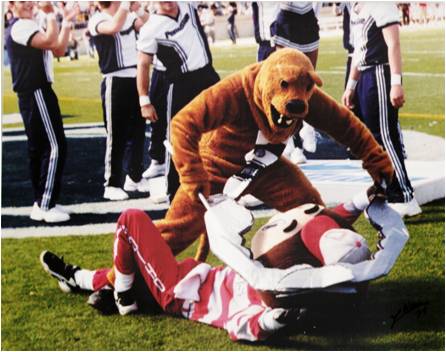 The committee’s rankings come out next week, but who do we like right now? We are not in agreement on all four teams, but we can both appreciate the beauty of a Leonard Fournette toss play. #NittanyWatch has taken on a whole new meaning. This Saturday should be highly entertaining. Thanks for listening.

Last year, I previewed the college football season with a bunch of made-up questions from fictitious readers mailbag. This season, I’m taking a different approach, bringing you up to speed on all the biggest offseason news and making fearless predictions for the opening weekend. Fasten your seat belts, fans, this is going to be as bumpy as a Bobby Petrino motorcycle ride.

Which one of the following college football headlines did not appear in The Onion?

END_OF_DOCUMENT_TOKEN_TO_BE_REPLACED

With the 2011 college football season kicking off on Thursday (!!!), it is time to address some of the important issues surrounding the sport. And what better way to do that than through a mailbag? Unlike other internet mailbags you may have read, this one does not guarantee these are actual emails from actual readers. (Note: I plan on doing mailbags throughout the season so please email me at andrewjkahn@gmail.com with any questions/comments. Thank you!

I know there was some conference realignment this past offseason but I also know a lot of what I heard was going to happen never panned out. Now that the season is about to start, can you remind me which teams actually moved? I’m too lazy to look it up myself. Thanks.
–Darren, Waterbury, CT

And that is how you get a Big Ten with 12 teams and a Big 12 with ten teams. Meanwhile, Boise joined a conference that included Utah, BYU, and TCU, only to see Utah and BYU bolt and learn it would have only one year with TCU (which will leave for the Big East starting next season). Nevada, Hawaii, and Fresno State will make the move from the WAC to the MWC next year but for Boise it looks like a lateral move, at least as far as gridiron competition.

I hope so, Stephen. For the third straight season the Broncos open the season with a high-profile match-up: they travel to Atlanta to face No. 19 Georgia after facing Virginia Tech last year and Oregon in 2009.

Boise gets to host TCU after a hilarious schedule swap—the Broncos were supposed to inherit Utah’s schedule, which included a trip to Fort Worth, but after TCU announced they’d be leaving the Mountain West next season, the conference basically punished the Frogs by moving the game to the Smurf Turf. Classic.

Aside from Georgia and TCU, Boise’s schedule won’t impress voters. Nevada lost Colin Kaepernick and isn’t expected to be much of a threat. That being said, we have seen the non-BCS schools build up credibility and momentum and work their way into BCS bowls. Now that Boise has done that, the next step could be reaching the title game. Unfortunately for fans of “the little guys,” if two schools from BCS conferences are also undefeated, especially if they are ranked high in the preseason polls, I can’t assure you Boise won’t be on the outside looking in.

I heard something about a new unsportsmanlike conduct rule this year, where touchdowns may be discredited. Is this true?
–Paul, San Diego

Yes, it is. And it’s really dumb. This season, celebration penalties that happen during the play are considered live-ball infractions. For example, if a ball carrier dances from the five-yard line and crosses the goal, the touchdown is negated and a 15-yard penalty is assessed from the spot of the foul, meaning the offense’s next snap would be from the 20.

You know those crazy flips running backs sometimes do to cross the goal on a breakaway touchdown? If they leave their feet before the goal line the TD is coming off the board. Penalized celebrations that occur after TDs will continue to affect the PATs or kickoffs.

So who wants to bet on when the first touchdown will be negated by this ridiculous rule? I’ll set the over-under as Saturday, Sep. 3rd at 10:00 pm EDT.

Will this year’s BCS National Champion once again come from the SEC?
–Brian, Chicago

Alabama and LSU check in at 2 and 4, respectively, in the preseason polls, with six other SEC teams joining them in the Top 25. In the first eight years of the BCS, the champions came from all six major conferences (with the SEC and Big 12 each having two champs). In the five years since, however, it has been all SEC: going backwards we had Auburn last year, Alabama before that, then Florida, LSU, and Florida.

But those are simply facts, not an answer to the question, so…I will say this year’s national champ will not come from the SEC. I realize the last two champions have managed to navigate the regular season without a loss, but that is a tremendous feat in the SEC and one I don’t think will be repeated this season. 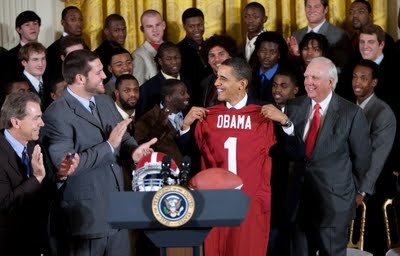 An underrated perk of being the President of the United States. (Credit: Lawrence Jackson/The White House)

Whatever you do, Rob, don’t listen to CBS analyst Gary Danielson, who has been proclaiming “the spread is dead” for years, despite the fact that many of the top offenses in the country employ some version of the spread attack. There is not one offense that will magically work better than others. The key is for a coach to recruit players that best fit within the system he wants to run. Under Rich Rodriguez, Michigan’s offense was terrible in his first year, middle of the pack in his second, and dynamite in his third. Now Michigan has a new coach with a different style—his willingness to adapt to his personnel will determine how good the offense is in 2011. And that leads us to our next question…

How will Brady Hoke mesh with Denard Robinson and the rest of the Michigan offense?
–Ryan, Astoria, New York

We really won’t know until the Wolverines take the field on Saturday against Western Michigan. Hoke and offensive coordinator Al Borges have said all the right things in regards to utilizing Robinson’s strengths, but right now that is just talk. If Borges is stubborn, it could be a rough transition. I will address this issue in greater detail in my Michigan Wolverines season preview, which will be published tomorrow.

Yeah, college football is great with all its cheating and what have you.
–Griffin, New York

OK, this is not a question, just a sarcastic comment my friend made after I reminded him about my preference for college football over the NFL. There’s no denying it has been a depressing past few months for the NCAA. Cam Newton and Auburn hung a cloud over National Championship Game and the scandals continued into the offseason: Ohio State. Oregon. North Carolina. Miami. LSU.

LSU and Oregon play each other on Saturday night, a match-up of top-5 teams, yet it’s hard to keep up with all of the suspensions. Miami and Ohio State play on Sep. 17 in what should be dubbed The Lack of Institutional Control Bowl.

I equate it to baseball, in that in the past decade or so, anytime a previously non-power hitter slugged a lot of home runs we questioned whether he was on steroids. Anytime a college football team has a great season—particularly if they are a non-traditional power—it is not unfair to wonder whether they are cheating. And that’s sad. I don’t know the answer. People say the NCAA rulebook needs to be tossed out and rewritten from scratch. I agree, though I don’t even know what that means.

That being said, when you flip on the television to watch your first game of the 2011 season, whether it be Thursday night or Saturday afternoon, hopefully those feelings will go away.

Hey, Andrew, can you believe I still have a job? My pal Gene and I sure can’t!
–E. Gordon, Columbus, OH

And again, please email me with any questions/comments for future mailbags!