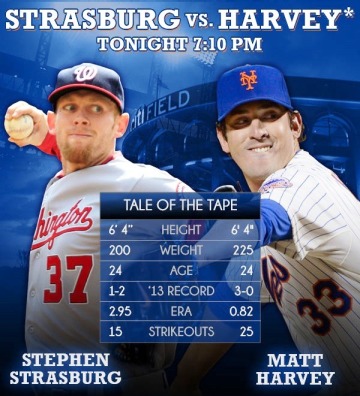 Nothing excites baseball fans like a young ace. When one takes the mound, there is a palpable buzz in the stadium. There’s always the chance of something special. Tonight at Citi Field, two of the best young pitchers in baseball, Matt Harvey and Stephen Strasburg, square off. There will likely be a lot of strikeouts and few runs, the kind of game purists love.

The sample size is small, but this figures to be the first of many National League East battles between these two. Harvey, of the New York Mets, was taken with the seventh pick in the 2010 draft and has made just 13 career starts, his first coming in July last season. He will turn 25 next March. Strasburg was taken by the Washington Nationals with the first pick in 2009, debuted the following year, and has made 48 starts. He turns 25 in July. As the image above notes, they both have the size—6’4″, 220-225 pounds—of a dominant starting pitcher.
END_OF_DOCUMENT_TOKEN_TO_BE_REPLACED

This is the weather forecast for the Mets’ series in Colorado this week: 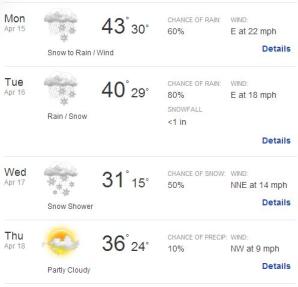 Doesn’t Thursday look beautiful? Spring hasn’t yet sprung for the Mets, who opened at home before going to Philadelphia. They played last weekend in snowy Minnesota; Sunday’s game was postponed due to inclement weather. Whether they will play their four-game series as scheduled in Colorado is uncertain, but unlikely.

I realize MLB scheduling is complex—teams want more home games in the summer and prefer home stands during holiday weekends—but let’s use some common sense here. Players shouldn’t have to dress like this.

I spoke with Peter Greenberg, a sports agent who represents many prominent Latin players, today and asked him about how his clients are handling the lower temperatures. He said it’s possible some young Latin players won’t have played in the cold until they reach the majors, as decisions about which minor leagues to send players to are sometimes based on the weather. Greenberg said that “typically Latin players don’t like playing in the cold,” but it’s something they must deal with, particularly this season. “There’s always a concern about injuries, especially with pitchers,” he said, referring to all players taking the field in colder temperatures. Performance and injury risk relative to the weather is nearly impossible to assess across the sport, but teams should be monitoring their players on a case-by-case basis.

Now that we’ve warmed up, let’s look at other noteworthy items from the first two weeks of the season:
END_OF_DOCUMENT_TOKEN_TO_BE_REPLACED

The Mets won their opener again today, beating the Padres 11-2 in front of a “sell-out” crowd. (This had to be an April Fools joke. Citi Field was sold out on Monday in the same way that this website is the most popular on the internet: it comes close, but needs thousands more people to visit for it to be true.) Sitting atop the division for at least one game is one of the few joys of being a Mets fan.
END_OF_DOCUMENT_TOKEN_TO_BE_REPLACED