The National League had three hits and was shutout 3-0 in the All Star Game. The Home Run Derby winner wasn’t an All Star. Chris Rock was a no-show for the Celebrity Softball Game. None of that prevented me from having a great time these past few days as the Mets hosted their first All Star Game since 1964.
END_OF_DOCUMENT_TOKEN_TO_BE_REPLACED 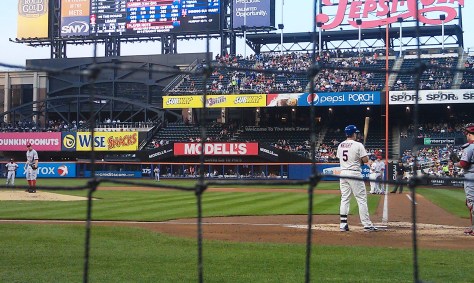 If Tim Teufel gets fired today, I’ll know why. But I’m getting ahead of myself. I went to last night’s Mets game. Even for a Real Fan™ like myself, if Matt Harvey isn’t pitching there’s little incentive to show up. But if the weather’s nice (it was), the company is good (yup), and you’ve got seats in the first row behind the on-deck circle with access to unlimited free food, you could argue it’s worth the trip to Citi Field. I’m not saying you would win that argument, but you could make it.
END_OF_DOCUMENT_TOKEN_TO_BE_REPLACED

Will Ike Davis ever become the hitter New York Mets fans expect him to be? As a rookie in 2010, Davis arrived in late April and hit .264 with 19 home runs and 71 RBI. He was off to a great start in 2011 before an ankle injury ended his season after just 36 games. Since, Davis has been capable of the long ball but little else. He looks lost at the plate. He has been dropped to as low as seventh in the batting order and often sits against lefties. The numbers say there is still hope for Davis to become the player many projected after his rookie year, but he better get it together soon.

Using Baseball-Reference’s nifty “Similarity Scores,” we can analyze players with similar statistical profiles. Davis turned 26 in March; some of the hitters most like him through their age 25 seasons are listed in the chart below (click to enlarge)*:

*Bob Robertson (who played from 1967 to 1979) and Glenn Davis (1984-1993), whose stats were also similar to Davis’, were omitted to focus on more recent players. Stats included are home runs, runs batted in, strikeouts, batting average, on-base percentage, slugging percentage, and on-base plus slugging, as well as the career BA and OPS for all players except Davis.

Mets fans have to be happy seeing those names. Delgado would be in the “Hall of Very, Very Good” if such a thing existed. Vaughn won an MVP. Karros and Clark were key contributors on playoff teams; Ortiz and Swisher still are. If Davis could progress as these players did, his career would be a success. But will he?
END_OF_DOCUMENT_TOKEN_TO_BE_REPLACED