Mets fans should not have been surprised by yesterday’s wild card-clinching victory. By my review, here are the seasons for which the Mets second-to-last regular season game mattered*:

END_OF_DOCUMENT_TOKEN_TO_BE_REPLACED

On the morning of August 20th, the Mets were 60-62. There were four teams ahead of them in the wild card race and New York was 5.5 back of the second best of them, curbing their playoff chances. In the 21 games since, the Mets have the best record in baseball (16-5) and find themselves in a three-team near-lock for the two wild card spots. How did it happen?

It was no secret why the Mets dug themselves such a hole. They simply could not get the big hit. As a team they weren’t great at advancing runners to second or third base, but they were competent. Once such a situation presented itself, however, Mets hitters may as well have been using toothpicks instead of bats.

For a good chunk of the season, they were flirting with the worst batting average with runners in scoring position in major league history. They were a few points ahead of the 1969 Padres (.201 with RISP). Because of hot hitting the past few weeks, the Mets have turned that figure from historically awful to respectably poor. Their .218 batting average with runners in scoring position ranks 17th-worst ever, and they’re moving down the list with every few successes.*

*In yet another reminder of the Mets’ uninspiring offensive history, six of the 14 worst seasons (as far as BA with RISP) belong to the Mets. Granted, four came in the franchise’s abysmal first seven seasons.

The timing of the turnaround is no fluke. On August 13th, leadoff man Jose Reyes returned from a stint on the disabled list. On the 19th, Asdrubal Cabrera and Yoenis Cespedes did the same. The Mets lost their first game with all three in the lineup, but have been on fire since. With Reyes, Cabrera, and Cespedes batting 1-2-3 in the order, the Mets are 13-1. Reyes has been a sparkplug, hitting .298 with five steals in his 27 starts since being re-activated; in 19 starts each, Cabrera has a slash line of .385/.424/.731, while Cespedes is hitting .308 with eight homers.

And that is why the Mets have survived injuries to starting pitchers Matt Harvey (out for season), Steven Matz (DL), and Jacob deGrom (probably headed there), while handing the ball to 10 different starting pitchers. It helps that Noah Syndergaard (2.48 ERA) and Bartolo Colon (3.27) have pitched at regular intervals and been superb.

The Mets’ schedule has helped, too. Their September schedule was the easiest in baseball, and they’ve feasted, sweeping Cincinnati and taking two out of three in Atlanta last weekend. They’ll start a series with the division-leading Nationals tonight and according to this article, they will have a favorable schedule to finish with three against Minnesota, three each against Atlanta and Miami, and six against Philadelphia.

Meanwhile, St. Louis and San Francisco, the two teams the Mets are battling, have faltered lately. Both are under .500 since the Mets got hot and their tougher schedules are partly to blame.

It’s unclear what kind of pitching rotation the Mets would be able to patch together should they reach the playoffs. A month ago, even considering such a problem would have been laughable.

We talk about it all the time in football and basketball. In major college sports, it helps determine who makes the postseason tournaments. Rarely is it mentioned in Major League Baseball. I’m talking about strength of schedule. It matters, and it affects the playoff races.

Let’s start with the less intriguing American League. The Blue Jays, Red Sox, and Orioles are all within three games at the top of the AL East. Strength of schedule won’t factor into that race. Their remaining opponents’ winning percentages are identical (51 percent) and they have several series left against each other. Boston and Baltimore are leading for the two wild card spots, but Detroit, which is just one game back of the second spot, has a more favorable remaining schedule. Here’s the complete list, courtesy of PlayoffPush.com, with the more difficult schedules on top: 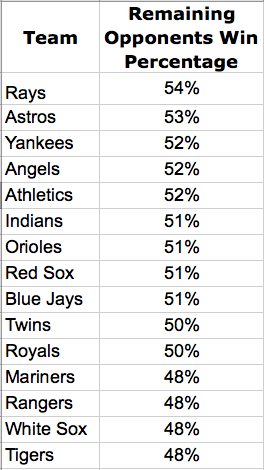 Strength of schedule should have a bigger impact in the National League. The Cubs and Nationals have all but clinched their divisions, but the Giants have a far easier remaining slate than the West-leading Dodgers. Let’s look at the wild card race. Who has the easiest remaining schedule in all of baseball? The Mets, who are one game ahead of Miami, tied with Pittsburgh, and one game back of St. Louis for the second wild card spot. 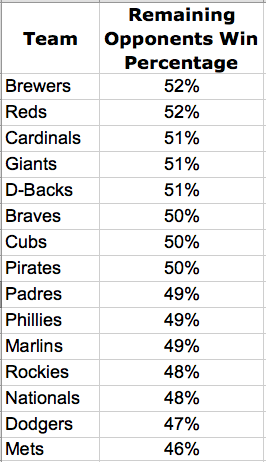 The Mets have six left against Washington, but 19 against Atlanta (34 games under .500 entering Wednesday), Minnesota (also 34 under), Cincinnati (21), and Philadelphia (12). New York’s other remaining games are against Miami, a team they’ve handled so far this season (winning 9 of 14). The Cards have the Reds and equally weak Brewers on their schedule, but also the Pirates, Cubs, and Giants. Last year the Mets feasted on the weaker teams to get to the postseason. They hope they can do the same this September.

Baseball is a sport where an incredible season (100 wins) still equates to just a .617 win percentage, much lower than the best teams in football and basketball. Things tend to even out over 162 games, and the nature of the sport makes it difficult to dominate. Still, as the calendar turns to September and the playoff hunt winds down, strength of schedule may be the difference.

The Sportswriting of Andrew Kahn