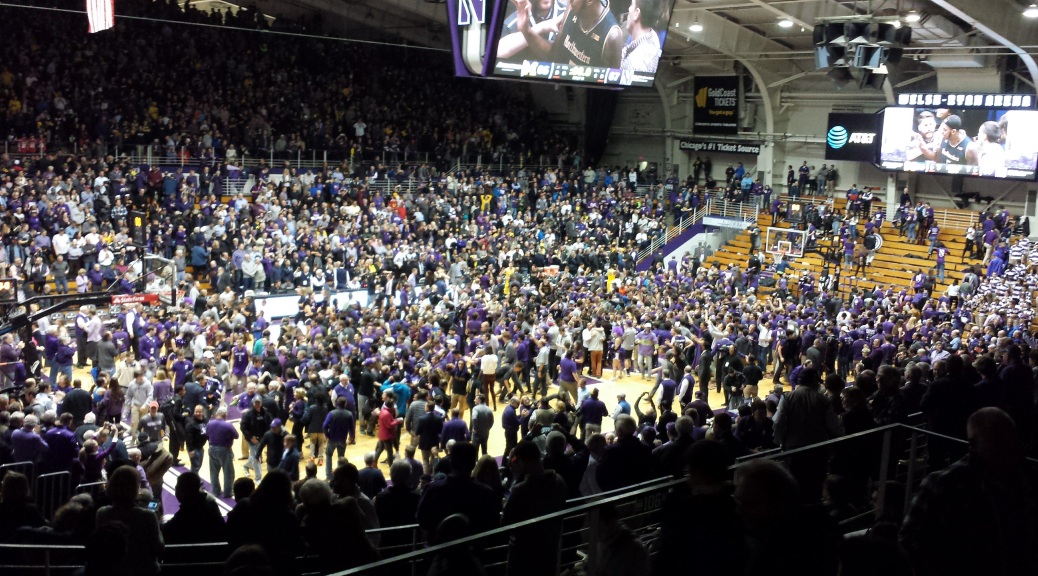 Imagine if Northwestern had not executed an incredible last-second play to perfection against Michigan on Wednesday, gone to overtime and lost. Given that the Wildcats lost their regular season finale on Saturday, that would have meant Northwestern would be entering this week’s Big Ten Tournament on a five-game losing streak. Their hopes of reaching the program’s first ever NCAA Tournament would still be alive but well…it’s a good thing they won.

I was at Welsh-Ryan Arena for the thrilling game and the atmosphere was terrific. I could tell you the mood was tense, but I’m not sure someone who didn’t know Northwestern basketball’s history would agree. Sure the fans groaned as the Wildcats missed the front end of three separate one-and-one free throw attempts down the stretch, but fans always do that in close games.

After the game-winning basket, the students rushed the court in celebration. It was just one game, but it gave Northwestern 10 Big Ten victories and another win over a team likely headed to the NCAA Tournament. The bracketologists believe the ’Cats are safe, and the win over Michigan was critical.

After the game, Northwestern head coach Chris Collins admitted that he changed his approach after the previous game, in which Northwestern blew a late lead against Indiana.

“There is a lot of pressure on these guys,” he said. “I’ve talked all year about how we’ve tried to stay focused on what’s in front of us. A couple days ago, I decided to go completely away from that. After Indiana, I came in and I challenged them. I told them there was pressure. … Anything good in life involves handling pressure and succeeding under pressure. We’re not going to avoid it anymore. … We’ve got to go out and win if we want to do something great.”

It was a bold approach, and it obviously worked, at least so far in Northwestern getting the much-needed win. It won’t matter how the Wildcats fare in postseason play so long as their name is called on Selection Sunday (though I feel it would be sort of lame if their first appearance was in one of the “play-in” games). In perhaps the program’s biggest game ever, the team delivered an epic victory.

“To be honest, this is the game I committed here for,” sophomore Vic Law said. “When I committed here, everybody said, ‘Why are you choosing Northwestern? They have no culture. There’s no basketball presence there.’ … I mean how can you not be excited to play in a game like this?’”