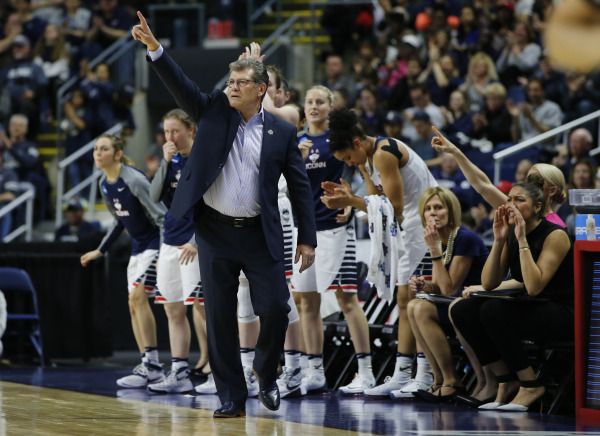 As the University of Connecticut women’s basketball team prepares for its ninth straight Final Four appearance, there is no debate over the program’s dominance. The Huskies are undefeated and beating opponents by an average of 40 points this season; the next best team’s margin is 24. Last weekend, they won their Sweet 16 game by 60 points, the largest margin ever for a game that deep in the NCAA Tournament. But if you think UConn’s reign over the sport is mostly due to peerless recruiting, think again.

The chart below details the recruiting for four women’s college basketball programs over the past four years.

Regardless of which team you’d expect to have the most on-court success—and, based on this data, you could make a good case for any one of them—I’d hope we could agree that not a single school is dominating recruiting relative to the others. In other words, even if you think the numbers favor one program, the edge is small.

To end the suspense, Team A is UConn, Team B is Notre Dame, Team C is Tennessee, and Team D is Duke. The data, which covers all players on rosters this season (except redshirt seniors), comes from Dan Olson’s website, girlsbasketballreport.com.* ESPN has used Olson’s rankings since 2014.

Geno Auriemma and his staff did snag the most No. 1 overall recruits—Breanna Stewart, now a senior, in the first class charted and true freshman Katie Lou Samuelson in the last one—and the most top-five recruits, but Duke got more from the top 10 and Notre Dame has had more McDonald’s All Americans. UConn’s average class ranking, which is the worst among this quartet, is weighed down by its one-player class in 2013 that ranked 69th, but even if you remove each team’s worst class, all would still have an average ranking of better than fifth. The differences in recruiting here are negligible. At the very least, it’s unfair to look at these numbers and say UConn’s recruits have been head and shoulders above other top programs’.

On the court, however, it’s been a different story. The data above tracks the players for four seasons, including this one. So far, UConn has won three national championships, and is a heavy favorite to bring home the title at this year’s Final Four (they’ll play Oregon State on Sunday and, should they win, the Syracuse/Washington winner on Tuesday). Notre Dame is the only other team to earn a No. 1 seed in all four years. They lost to UConn in the Tournament’s final weekend three times before falling in the Sweet 16 this year. Neither Tennessee nor injury-plagued Duke has reached a Final Four in that span; Duke didn’t even get a Tournament bid this season.

And it’s not just that UConn has been the best team the past several years. What proves that their edge goes well beyond recruiting is the Grand Canyon-sized gap between UConn and the rest of the field. The aforementioned scoring margin numbers are nearly identical to last season’s, and the two years prior were also stark. Since losing to Notre Dame in the Big East Tournament championship on March 12, 2013, UConn has gone 120-1, with every win coming by double digits. Read that last sentence again. The lone loss occurred in the second game of last season, at Stanford.

The dynasty was not built simply by Auriemma signing the best players every year, because UConn does not do that. According to Olson, he recruits players that will fit well together and that are really good kids, personality-wise. But it is clearly development that sets Connecticut apart. “He gets good players,” Olson told me. “But those good players get a lot better.”

And that is why the Huskies are on the brink of an unprecedented fourth straight national championship. They recruit elite players, sure, but the development and blending of those players in a competitive and fiercely demanding culture is the difference.

Put it this way: Of all the things that make UConn great, acquiring talented players might be the easiest for another program to replicate.