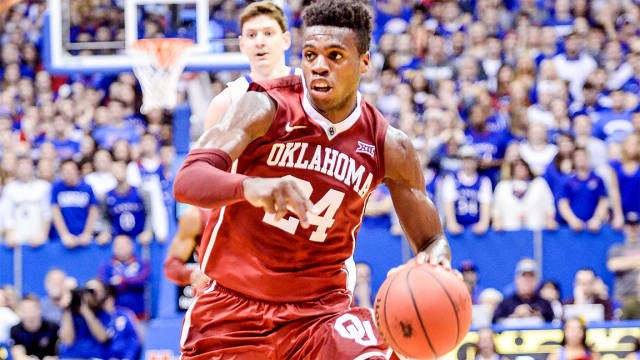 With the college football season now complete, I know a lot of you have turned your attention to hoops. Allow me to bring you up to speed by taking a look at the college basketball teams and players that have made the most noise so far.

If I could only select eight teams in the hopes of picking the national champion, my choices would be North Carolina, Oklahoma, Michigan State, Kansas, Maryland, Xavier, Gonzaga, and Wichita State.

This list looks the way it does partly because of stubbornness. My early season Final Four predictions were UNC, Kansas, Gonzaga, and Wichita. I have perfectly logical reasons to still have faith in the first two: the Heels and Jayhawks are both ranked in the top five and have several impressive wins and just four combined losses.

The other two have looked shaky. Gonzaga’s nonconference performance was mixed: wins against Connecticut, Tennessee, and Washington but losses to Texas A&M, Arizona, and UCLA, the latter two at home. I was high on the Bulldogs because of their dominant frontcourt, but a key piece—starting center Przemek Karnowski—played in just the first five games and is out for the season with a back injury. Domantas Sabonis has elevated his game, though, so if the Zags look good against Saint Mary’s in a week and SMU in a month, I’ll look less crazy.

Wichita lost three in a row in November to fall to 2-4. Has an eventual national champ ever started 2-4? I would think not. Excuses for those losses can be made, however, and I will gladly make them. Fred VanVleet, the engine that makes Wichita go, had a sore ankle and hamstring in the loss to Tulsa, injuries that caused him to miss the next four games (Wichita beat a team called Emporia State and lost to USC, Alabama, and Iowa). VanVleet simply played poorly in an overtime loss to Seton Hall but Wichita did beat Utah. I’m not giving up yet.

Notable omissions from my list are Villanova (prove me wrong in March, for once), Duke (Amile Jefferson is vital if not flashy, and nobody knows when he’s coming back), Kentucky (can’t shoot), and Virginia (would be included if my arbitrary cut-off was nine teams). The sport’s only unbeaten, SMU, is ineligible for the NCAA Tournament and therefore—and I mean this in the nicest possible way—not worth discussing.

An unranked team I still really like is Valparaiso. All of their three losses (road games against Oregon, Ball State, and Belmont) went down to the final minute, and Valpo won at Oregon State. They have the No. 1 defense in the country according to KenPom.com and size that belies their mid-major status. Alec Peters could challenge Kay Felder for Horizon League Player of the Year, and that’s saying something (see below).

Hield (26.6 points per game, second in country) has gone from a bit of a chucker to a guy shooting 52 percent from the field and from three and 90 percent at the line. Dunn is a feisty guard with great athleticism. At times it seems like the only player capable of stopping him from driving to the hoop would be his clone. The four games Valentine missed, which are hurting his candidacy at this juncture of the season, will be insignificant if he stays healthy the rest of the year and continues to stuff the stat sheet. LSU is 9-6, which doesn’t help Simmons’ chances, but his overall game is incredible. The 5’9” Felder (third in country in scoring) is fun to watch and has stepped up against good competition, going 10-for-22 against both Michigan State (37 points) and Virginia (30).

This year has been more topsy-turvy than last, when Kentucky was ranked No. 1 the entire regular season. Four teams have already occupied the top spot this year; five if you count Oklahoma’s top ranking in the Coaches Poll last week (and the Sooners will be No. 1 in both polls if they beat West Virginia on Saturday). Enjoy the ride!