My great Aunt Naj used to tell a story about buying a Yankees yearbook. She liked that it would serve her not just for the year printed on the cover, but likely for a few seasons. “Nowadays,” she would say, “it’s outdated in five minutes.” She was born in 1928, more than 40 years before Curt Flood got the ball rolling on free agency, and didn’t like all the roster turnover of modern baseball.

When the 2015 yearbooks are released, Jimmy Rollins will not appear in the Phillies’ book for the first time in his 15-year career. He was traded to the Dodgers a few days ago. It was yet another reminder that the “lifer,” defined here as someone who played his entire career of at least 10 seasons for just one franchise, may soon be obsolete.

I’ve always been interested in lifers. When I wrote about them in 2010, 11 players qualified: six retired with their lifer status intact; the other five have since played for other teams. There are currently nine lifers in MLB:


Philadelphia has two lifers and two others, Cole Hamels and Carlos Ruiz, who will qualify next season. But the Phillies prove the point about modern lifers: not only did they just trade Rollins, but Hamels is reportedly being shopped and they believe they’re better off without Howard.It sure seems like there’s less loyalty between teams and players these days, but let’s look at the raw numbers, by decade: 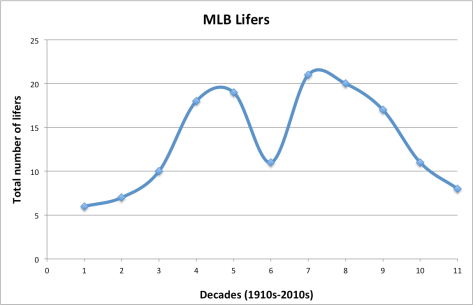 Note: Each player counted for just one decade; if he played in even one season in a new decade, he was counted for the more recent one. For example, Luke Appling, whose final season was in 1950, would count as a 1950s lifer, as he had a chance to play for another team in that decade. Click here for what I believe is a complete list of MLB lifers.

There are many factors that influence the data represented above. There were only 16 MLB teams until 1961. By 1962, there were 20, and that number continued to increase until it reached 30 in 1998. In other words, over the course of baseball history, players gained more options as far as destinations. Free agency as we know wasn’t permitted until 1975, leading to a boom in player movement.

As you can see in the chart, the totals are trending downward. The good news for people like my Aunt Naj who like to see “loyalty” between players and teams: Most of the current lifers are signed to long-term contracts. Also, teams are starting to invest in stars earlier than ever, leading to long-term deals for players like Mike Trout and Giancarlo Stanton. Still, there’s no guarantee any of these players will retire with their current franchise. In reality, lifers are on life support.