The first people I recognized on the day of the NBA draft were the Zeller parents on the ninth floor of the Westin hotel in Times Square. This couldn’t have been more fitting. If you’ve watched any college basketball the last five years, you’ve seen them. As the parents of three sons who played college ball, Mr. and Mrs. Zeller have gotten as much airtime on ESPN as Dick Vitale.* Cody, the Indiana center, was this year’s draftee, so when he showed up to meet his parents for breakfast, followed by his oldest brother and his family, I felt right at home.

*In the Zeller family, each son is better than his older brother, as opposed to the Kahn family where the middle son is by far the most talented.

I was at the hotel by 9 a.m. to shadow Trey Burke throughout the most important day of his life. I chronicled Burke’s experience for Michigan Today. Due to a word count and the fact that the piece focused on Burke, many of my observations went unreported. Here is what didn’t make it into the story, starting with what I saw at breakfast:

I spoke to Burke’s parents, Benji and Ronda. Mrs. Burke told me that she was sold on the University of Michigan before Trey was. She fell in love with the campus on their first visit, even though the new Crisler Center still only existed on paper. The same thing happened with me—my mom loved Ann Arbor right away. Speaking of my mom, she would have liked the draft day experience—meeting other players’ moms, going to various events—so it’s a shame I came up just short in my quest to become an NBA player.

At the 11:00 meeting for the green room invitees, Harrison Barnes and Andre Igoudala stressed showing up early to earn teammates’ respect. The message was clear: basketball is their job now.

After the meeting I rode the elevator with Burke, Noel, and Zeller. It was like an NBA draft promo poster come to life inside a cramped space. Nobody spoke except for a few goodbye grunts as each got off at his floor. That’s when Burke and I spoke for the longest amount of uninterrupted time. Here are some of his comments that didn’t make it into the original story:

While Burke was at lunch with his family, the other top prospects, and David Stern, I roamed around the hotel. Some observations:

During this time I spotted three guys wearing Trey Burke t-shirts and introduced myself. It turns out they were groomsmen in Benji’s wedding: Scott Reeves, Keith Warner, and James Farmer, all originally from Columbus, OH, and former college players at various levels. A charter bus of 60 people was coming from Columbus for the draft, but these three came separately. Here’s what I learned from them:

Being a smart New Yorker, I took the subway from the hotel to Barclays instead of the media shuttle, and beat the players to the arena. That allowed me to go on stage and use this pointless awesome feature on my phone to take this picture:

That’s the view the players saw when shaking Stern’s hand (minus the ladder). The players arrived at Barclays a little before 6:00. Here’s what went down:

As I waited for Burke outside of the holding room while he was in the process of being traded from Minnesota to Utah, most of the draft picks stopped by for a makeshift photo shoot: 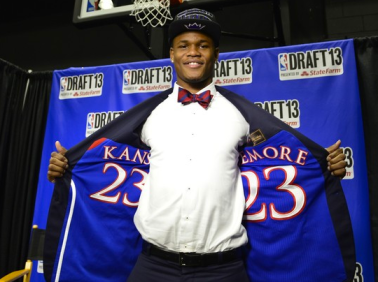 Burke emerged after two hours and made his way to his first press conference as a pro. Along the way, the photographer urged him to come back, at some point, for his shoot. “You’re too clean not to get your picture taken!” From the press conference:

Burke left for Salt Lake City the next day, returned to Columbus late on Saturday, and left for summer league in Orlando the following Tuesday. I think he’ll do well in the NBA. I spoke with Hardaway Jr. on the phone after the draft and he told me that Burke was quiet and didn’t go out much in college. He transformed himself from a freshman who didn’t show his emotions to a mature, vocal leader as a sophomore.

The two often played NBA2K13 together and Burke borrowed a lot of his on-court moves from the video game (note to self: buy an XBox). Hardaway said Burke would switch up which teams he played with. “Any team you think he can’t win with he’ll try to play with that team.” It sounds a lot like the situation he’s entering with the rebuilding Jazz.