The NCAA Tournament is the greatest thing ever created. Here are 32 reasons why, followed by a post giving the 32 reasons why this year’s Tournament is particularly great. I know there are 68 teams in the field, but let’s be honest, March Madness doesn’t truly begin until the play-in rounds are complete and the 64-team field is set. Disclaimer: While many of you can relate to the following list, some of the items depict me as a sick, basketball-obsessed lunatic. I’m totally not, you guys. 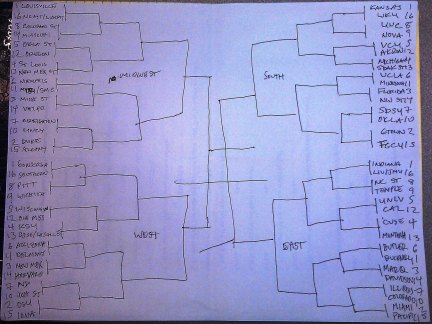 1. The Selection Show
The 30 minutes or so leading up to the unveiling of the bracket is a highlight of my year. I create a blank bracket by hand and fill in the teams as they are announced. I usually place Duke as the 1 seed in Greensboro ahead of time.

2. Team reactions on Selection Sunday
CBS used to put cameras on several different teams during the Selection Show: a mix of high-profile teams, automatic bids from lesser-known conferences, and bubble teams. It was always great to watch the pure joy from the bubble teams that got in and equally compelling to witness the despair of those that didn’t. CBS doesn’t seem to show bubble teams anymore and that’s a shame.

4. Jay Bilas arguing about teams that got in
Bilas feels no more than 16 teams belong in the field.

5. Charles Barkley talking about college basketball
Now that Turner has partnered with CBS, we have the privilege of listening to Sir Charles talk about teams he has never seen play. This year, get ready for a reference to “Kyle Olnicky of Gonzega” or maybe Louisville’s “Georgie Dung.”

6. The bracket
High society can have their Mona Lisas and Sistine Chapels. Give me a bracket. It is a thing of beauty. Fun fact: If you turn the bracket sideways, you’ll see an ever-decreasing set of football goal posts. Try it.

7. Filling out the bracket
There is no wrong way to fill out a bracket. There are those who do it quickly because they don’t know any better or they already know everything. There are people like me who take forever. I like to fill mine out by hand before eventually entering various online contests. If you only fill it out electronically there is a good chance we wouldn’t get along.

8. Bracket contests
If you can relate to more than a few things on this list, you are not going to win your pool. The person who has no idea what I’m talking about—or thinks I’m nuts—will.

9. Greg Gumbel
He is the first person to officially welcome us to the start of the Tournament on CBS. It is the only time all year I am excited to see a Gumbel.

11. Betting
Let’s not kid ourselves: like the Super Bowl, a big part of the appeal of the NCAA Tournament is betting. The most common form of betting is entering a bracket pool, but you can also bet on individual games or do a draft, where participants select the teams in the field and accumulate points for every victory.

12. The opening weekend
48 games in four days. The best weekend in sports, every year.

13. The hope of the perfect bracket
Of course this will never happen, which is why companies can offer $100 million to anyone who does it. But until you make your first X on your bracket, you can dream.

14. Gus Johnson
It is a travesty he no longer calls NCAA Tournament games. His calls during the Xavier-Kansas State game in 2010 and UCLA-Gonzaga in 2007 are particularly memorable.

16. Buzzer beaters
Admit it, even Laettner’s is fun to watch.

17. That one commercial that gets repeated 200 times
Two years ago, it was the “Napa Know How” commercial, a 30-second spot that warrants its own blog post. Last year, it was the band in the tour bus singing, “It started with a whispeeerrr,” as the lead singer, wearing heart-shaped sunglasses, places his pointer finger on his chin. Like I said, they play it a lot. Do I hate these commercials? Yes. Do I love them? Absolutely.

18. The nicknames for the Tournament rounds
The beauty of Sweet 16. The loftiness of Elite Eight. The simplicity of Final Four. Whoever came up with these deserves a Nobel Prize.

20. Iconic photos
Jordan beating Georgetown. Chris Webber calling timeout. And this one, which I call “Hope.”

21. Obscure mascots
This year, get ready to learn what a Billiken is (or at least get ready to be told; you still won’t understand). We also have Zips, Shockers, Flames, and Explorers in this year’s field. And don’t forget the lovable mascot for the Western Kentucky Hilltoppers. According to his official website, “Big Red’s signature moves are the belly slide and belly shake.”

22. Geography lessons
Where is Valparaiso? How about Creighton? Davidson? Pay attention, high schoolers, you may find your college on the bracket.

23. Bad geography lessons
The bracket is divided into four regions: East, West, South, and Midwest. There is no North, which might explain why I am lost trying to fill mine out.

24. The hope of a 16 beating a 1
Normal people talk about what sorts of medical and technological advances they might expect in their lifetime. I think about whether I’ll ever see a 16 beat a 1.

25. Portable radio in school
I’m not sure why schools are even open during the first round of the Tournament. But they are, so as a youth I had to sneak a radio and headphones into class. In fifth grade, my friend Kyle and I would make repeated trips to the bathroom to check on the scores, timing our visits with the 20/20 updates on WFAN. One year, our teacher had a sign-out sheet for the bathroom. Worried she would see our names littering the sheet at the end of the day, we started using classmates’ names.

26. The lingo
Bubble, bracket buster, Big Dance, and those are just the B’s.

27. The Masters commercial
A tradition unlike any other…

28. Highlighters
There are only two instances where you’d use a highlighter: to study for a test and to mark a winner on your bracket. Highlighters, better than anything else, show the good and bad of life.

29. Bracket abbreviations
Say you want to pick Michigan State: do you write MSU or Mich. St? Be careful—if Mississippi State is in the same region, the shorter abbreviation could cause confusion. My only rule is consistency. Don’t change from “Cuse” to “Syracuse” midway through the bracket, even though you may be tempted by the changing amount of space you are given. For example, most brackets provide two centimeters to write your first round winners, then a slightly less amount for the next few rounds before increasing to 3.2 centimeters for your championship teams. For your champion, they reduce it to 2.8 and limit the height of your letters by making you write it in a box. Whoever came up with the design of the bracket is a genius, but also a little sadistic.

30. The Madness
The NCAA Tournament is the perfect blend of competitive fairness and unpredictability. The better teams are more likely to advance, but in a single-elimination format where teams have to play twice in three days, anything can happen.

31. Jim Nantz’s corny call
A Miles-tone victory for Arizona!…You can leave it to Cleaves!…When people say you can’t, you can, and UConn has won the national championship! The CBS play-by-play man always ends the title game with a line he probably spent weeks preparing. Last year’s was lame (“The Kentucky coronation is complete!”). We’re expecting better from you in 2013, Nantz. (By the way, it was Billy Packer who delivered, “Simon says: Championship.” This is disappointing.)

32. One Shining Moment
You could convince me that this is the greatest song ever written. A well done video brings a tear to my eye. One year, someone thought it would be a good idea to turn “One Shining Moment” into a Jennifer Hudson music video. Hopefully that person was fired.