My latest column for CBS Charlotte was posted on Monday. You can read it by clicking the link below:

As I mentioned in my article, Syracuse and Louisville were both upset due to poor late game offensive execution. Syracuse started milking the clock when there was still plenty of milk left in the clock. It seemed like Louisville’s problem was several guys wanting to be the hero and forcing contested jumpers. Those are two ways to lower your chances of winning a close game. If we’re comparing the two schools, Syracuse’s failure to stay on the attack is less excusable.

Speaking of attacks, there was a bat in the gym at the Providence-Marquette game on Saturday. Some of the players were throwing towels at the bat, presumably in an attempt to catch it (where was Manu Ginobli when you needed him?). Had I been on the court, I would have acted like Providence coach Ed Cooley, who covered his head with a towel. I was once indoors with a bat, at a Walmart in Michigan’s Upper Peninsula last summer. I was terrified, practically diving between aisles when it came within 20 feet of me. My fellow shoppers thought nothing of it, as if bats are supposed to be indoors. I threw my money at the cashier—“Keep the change!”—and ran out of there.

Marshall Henderson of Ole Miss is the SEC’s leading scorer and good friend of the Auburn student section. With Ole Miss playing a nationally-televised game against Kentucky last night, I decided I’d see him for myself. He is certainly entertaining. Upset with a call, he placed the ball down on the court and walked away before the referee made him retrieve it. He snatched the ball from a Kentucky player after drawing an offensive foul. He picked up a piece of ice that fans had thrown onto the court and rifled it into the student section (the game was in Oxford). And that was just the first seven minutes. I can see how Henderson could be viewed as more annoying than the guy from the 5-Hour Energy commercials shown throughout the ESPN broadcast (“My deeebut album”), but the game was more fun when he was on the court. USA Today published a feature on Henderson’s troubled past today.

Pets of the Week

In honor of the Michigan Wolverines rising to No. 1 for the first time since 1992, I bring you two dogs showing off their love for Michigan. Both photos come from Michigan alums: Chico, on the left, comes from Rebecca, while Riley was submitted by Lucas. 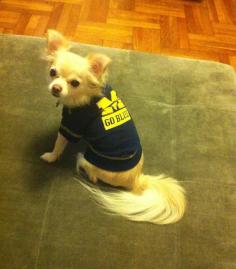