Perhaps the best indicator that Notre Dame football is “back” is that GameDay is going to South Bend. The ESPN pregame show was in South Bend for the “Bush Push” game in 2005 but Saturday will mark its first trip back since. While Notre Dame had some rough years on the gridiron, GameDay host Chris Fowler indicated on Twitter it was more than poor play that kept his crew from returning: “We were “uninvited” during previous regime,” he wrote, before noting that the problems came up sometime after 2005.

But those problems seem to be behind Notre Dame, 5-0 and ranked No. 7 in the country. Notre Dame has not trailed at any point this season, the only team in the country that can make that claim. The defense is getting most of the credit for the resurgence, and rightfully so. The Irish are allowing just 7.8 points per game, fewer than every school except Alabama. The last team to score a touchdown against Notre Dame was Purdue on September 8th. Miami and Michigan, ND’s last two opponents, scored 44 and 63 points, respectively, in their games before getting shutdown by the Irish. Senior linebacker Manti Te’o would be a Heisman contender if not for the fact that a defense-only player has never won the award.

Another huge factor in ND’s turnaround has been turnover margin. At the end of last season, the Irish were -15 in turnover margin, second-to-last in the country. Their +9 margin this year is good for ninth. After an incredibly unlucky 2011 in which the Irish recovered just 45 percent of their own fumbles, they have recovered 85 percent of their own fumbles (6 of 7) this year.

ESPN’s “similar teams” generator doesn’t think much of the 2012 Fighting Irish, however. Here are the similar teams, based on a variety of statistical measures:

Tulsa had the best overall record at 10-3. My younger brother Steve, who will be at GameDay on Saturday morning, pointed out this list to me, saying he found it both “sad and hilarious.”

Florida State is not back!

It’s possible Florida State is the first team to ever get caught looking ahead a half dozen games. Up 16-0 at half last Saturday at North Carolina State, the Seminoles were outscored 17-0 in the second half and lost. “We still control our own destiny in the ACC,” Florida State coach Jimbo Fisher told the Associated Press after the game. It’s sort of a depressing thought to begin with, but especially since it is wrong: Maryland is 1-0 in the ACC Atlantic.

NC State quarterback Mike Glennon, 6’6”, looking like a fawn on ice on one particular fourth quarter run, led the Wolfpack on a game-winning drive after a blocked punt. The next day I went to the NC State athletics website and was greeted by two pop-up ads: one for a commemorative t-shirt with the score of the game and another for a 50 percent coupon for a Papa John’s pizza (also because of the win!). Now I see why Wolfpack fans acted so crazy.

Fun Factoid, Gator Nation Edition: What do Urban Meyer, Will Muschamp, and Steve Spurrier all have in common? They have all been the head coach at the University of Florida and they are all undefeated in 2012, a combined 17-0.  (By the way, are Muschamp and Miami coach Al Golden the same person? They are both very sweaty, I know that.)

Fun Factoid, AARP Edition: Per ESPN Stats & Info, the three oldest coaches in Division I-A—Kansas State’s Bill Snyder, Ohio’s Frank Solich, and Spurrier—are a combined 17-0 this season. They may not know how to post videos on Facebook, but they know how to coach.

Fun Factoid, Rivalry Edition: Saturday’s Red River Rivalry between No. 13 Oklahoma and No. 15 Texas marks the first time since 1999 that neither team is ranked in the top 10. For more about where your favorite college football rivalry “ranks,” check out my Wall Street Journal story published today.

Stat of the Week: 22-33. That’s Gene Chizik’s record as a head coach when Cam Newton is not his quarterback.

Clown of the Week: Charlie Weis, Kansas University head coach. This is not an Onion headline: “Charlie Weis practices without seniors on Sunday, to ‘develop younger players for the future.’” And you thought genius play-calling was the only way to get a decided schematic advantage. Weis has been making plenty of headlines lately. Before his team’s 40-point loss to Kansas State on Saturday, he took to Twitter to express his disappointment with the Kansas student newspaper for not supporting his team, which was 1-3 at the time. Earlier this week, he indirectly intimidated a reporter from the paper before a press conference. Weis is simply not fit to be a head coach at any level.

Video of the Week: Illinois junior quarterback Nathan Scheelhaase tries to high-five a referee after scoring a touchdown against Wisconsin. Illinois would be outscored 31-7 after this moment and fall to 2-4 on the season.

Quote of the Week: “Just like they said in Dumb and Dumber, ‘let’s totally redeem ourselves!’”
—Northwestern head coach Pat Fitzgerald during a practice last week

Tweet of the Week: “Why should we have to go to class if we came here to play FOOTBALL, we ain’t come to play SCHOOL, classes are POINTLESS”
—@Cordale10 (Cardale Jones), a back-up quarterback for Ohio State. Jones didn’t dress for last Saturday’s game against Nebraska after Urban Meyer learned of the tweet, which led to this excellent lead by the Toledo Blade’s David Briggs: “Mark it down as DNP (Tweet).”

Kahn Family Smiles: This beloved feature is back after a three-week hiatus: first because Notre Dame and Michigan played each other; the next week because they were both off; last week because I simply forgot. Michigan is a big favorite against Illinois, especially with rowdy Michigan supporter Jason Frank in attendance. But where do I lean in Notre Dame-Stanford? 🙂 🙂

Pet of the Week: My Aunt Bethy sent me this great photo of her dog showing his support for the Irish in preparation for the Stanford game. His name? Rudy, of course. 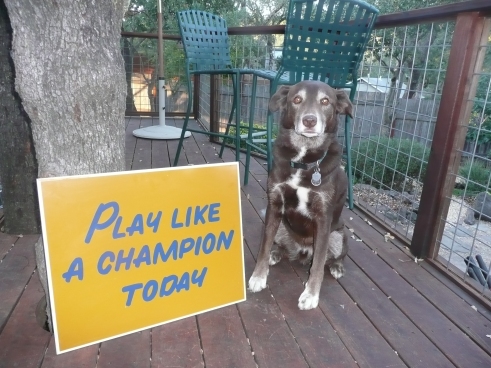