The regular NFL referees were welcomed back this past weekend. “Just found out Ed Hochuli an the boys are back! Glad u all reached a deal,” tweeted San Francisco wide receiver Randy Moss, whose excitement—or, better yet, relief—was shared by NFL players and fans alike. But let’s not act like these guys are national heroes. We could have done without the chest-bumping or the Monday Night Football-style introductions. Soak it up, boys, because we will turn on you.

Year of the Bird

For the first time all season, 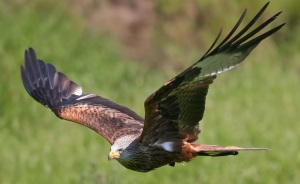 the Falcons trailed on Sunday before pulling out a miraculous victory to stay undefeated. The Cardinals hadn’t lost until last night and are in first place in the NFC West. The Eagles and Ravens are both 3-1 and atop their respective divisions. Yes, 2012 is shaping up to be the Year of the Bird. It looks like my All-Avian preseason Super Bowl prediction is looking pretty good right now.

Did you see that 53-yard field goal Greg Zuerlein made for the Rams last night? Yeah, me neither, but Zuerlein’s season has been impressive so far. The 24-year-old rookie, a sixth-round pick in this year’s draft, is 13 for 13 on field goals. Last Sunday, he set a franchise record with a 58-yarder, a mark that lasted for all of two quarters: later in the game, he hit a 60-yarder. Zuerlein started at the University of Nebraska…Omaha, before the school dropped its football program and he transferred to Missouri…Western State University. His record-setting day earned him the NFC Special Teams Player of the Week Award and, more importantly, some great nicknames: Legatron, Greg the Leg, and Young G.Z, to name three.

I still haven’t seen an explanation for what Santonio Holmes did on the first play of the fourth quarter. After catching a pass—yes, the Jets completed a pass last week—Holmes fell to the ground in pain; instead of letting a defender touch him, which would have ended the play, Holmes just tossed the ball in the air. A San Francisco defender scooped it up and returned it for a touchdown. Two weeks ago, fed up with his showboating, I made Holmes my “Clown of the Week.” Consider him a two-time winner.

Then again, Holmes had some company at MetLife Stadium on Sunday. Tony Siragusa was FOX’s sideline reporter for the game, though that is like saying an airplane passenger is a pilot: Siragusa is on the sideline, but that’s the only part of the job description he fulfills. Unlike your typical sideline reporter, “Goose” talks throughout the game.

If someone went through the tape they might find he spoke just as much as the color commentator; Goose doesn’t wait for the booth to “send it down to the field for an update” before he chimes in with his thoughts. “It’s gonna be a pass, guys,” he might say an instant before the snap, as if this information is useful to the viewer. Siragusa manages to crowd the booth without physically being there.

Tweet of the Week: “With Santonio Holmes now out for the year & Keller banged up, there’s not 1 NYJet worth owning in standard 10 tm ESPN fantasy lg. Not even D”
—@MatthewBerryTMR (Matthew Berry, ESPN fantasy football expert)
Analysis: It’s sad because it’s true.

Video of the Week: Brandon Meriweather of the Washington Redskins collides with teammate Aldrick Robinson in pregame warm-ups. Both were put on the inactive list after the collision, in which Robinson suffered a concussion. Meriweather, who had been out with an injured knee, re-injured it during the freak accident and won’t play again this Sunday.

Interview of the Week: Liam Neeson on SportsCenter:

The Taken actor was apparently under the impression he would be speaking about something other than American football, because he is caught off guard when the first question is about Sunday’s Jets-49ers game. (I wonder if an ESPN producer whispered “good luck” in Neeson’s ear just before he went on air. If so, I wonder if that producer is still alive.) After Neeson admits he doesn’t understand the rules of football, the anchor follows-up with an even more specific question about Tim Tebow, to which Neeson responds, “You’re speaking ancient Arabic to me, buddy. I swear to you. I just don’t understand the game yet. I’m so sorry.” Was I the only one shocked to learn Neeson doesn’t speak ancient Arabic? He ends by saying he appreciates “the athletics” of the sport and that games in Europe end in “severe violence.” Yeah, there’s a reason I created the “Interview of the Week” award this week.

Runner-up: Thomas DeCoud of the Atlanta Falcons plays the “Meow” game live on ESPN. It wasn’t a great week for SportsCenter anchors.