If you watched college football last weekend and thought to yourself, “I’m sure the match-ups will be better next week,” you will be disappointed. Instead of two games between ranked teams, we have none. Many of the top-ranked schools that feasted on cupcakes last week are returning to the bakery on Saturday. Not a single game will be played in Ireland. But remember, boring college football is still better than an exciting version of most anything else.

In case you didn’t see it, check out this video from the Towson/Kent State game, in which a Kent State player runs the wrong way.

The play is hilarious for many reasons, most of them having to do with a lack of understanding of the rules. The ball touches a Towson punt returner, so the ball is live. While the kicking team is free to recover the fumble, they cannot advance the ball. If we’re pointing fingers here, our first should be directed at the referees for not blowing the play dead as soon as Kent State’s Andre Parker secured the ball. Secondly, we need to blame Parker for, of course, running the wrong way. Thirdly, if the Towson punt return team thought the ball was in play, they shouldn’t have tackled Parker; they should have let him run all the way into his own endzone (although, again, the play was dead). The announcers pick up on this but they, too, should have realized the ball is dead in such a situation. It may be premature, but I’m going to nominate this for Dumbest Play of the Year, provided we can make a dozen trophies for all the guilty parties.

Week 1 gave us another potential award-winner: Ohio State’s Devin Smith’s one-handed catch against Miami (Ohio). (It’s very possible the video has been removed by the time you’re reading this, as the powers that be do NOT like their fans to freely watch highlights on the internet.) The defensive back had actually run past Smith and was in prime position for the interception, as it appeared the ball was overthrown. That is, until Devin Smith says, “I CAN’T BE OVERTHROWN.”

“Misty taste of moonshine, teardrops in my eyes”

West Virginia scored 69 points against Marshall on Saturday as Heisman candidate Geno Smith threw for 323 yards and four touchdowns and rushed for another score. The Mountaineers have scored 139 points in their last two games (they hung 70 on Clemson in the Orange Bowl). Naturally, West Virginia needs a week off to prepare for their September 15 showdown with James Madison.

“I told you that I’m crazy for these cupcakes, cousin!”

Five ranked teams played FCS schools (Division I-AA on this site from here on out; I’m old school) in Week 1. I don’t think this should be allowed. In fact, I’m in favor of shrinking Division I-A (FBS, as it is officially known) from its current 120-school membership down to about 70 or so. The football programs at Michigan and Eastern Michigan share a county, but that’s about it. Their resources are nowhere near comparable. They don’t belong in the same division and shouldn’t regularly compete against each other.

Strap on or sit out

I really like the new rule regarding helmets. If a player’s helmet comes off during a play he must sit out for the following play (unless it comes off due to a penalty, like face mask). The rule was put to use often this weekend, including on a key third down in which the Georgia Tech starting quarterback had to sit out. Any time a helmet pops off, my dad says, “The only way my helmet was coming off was if my head was inside it.” I felt the same way about my helmet during my playing days. For whatever reasons, some players wear their helmets loose enough that a big hit can unbuckle the straps and send the helmet flying. Hopefully this new rule will encourage players to strap their helmets a bit tighter.

That gigantic video board is awesome though, right?

How did Michigan do against Alabama at JerryWorld? This sums it up nicely: Before the first quarter was done, my friend Lee turned to me and said, “Your basketball team should be pretty good this year, right?” The Wolverines may have been overrated, but Alabama is like a junior NFL team. Attrition doesn’t seem to affect Nick Saban’s squad; he just reloads with more future pros. SEC may as well stand for Superior Engineered Competitors.

There were some positives for Michigan alums like myself. Brent Musburger guaranteed that Michigan’s Dennis Norfleet would return a kick for a touchdown this season. So we’ve got that going for us, which is nice. Also, while watching Dumb and Dumber (for the 4,927th time) a few hours after the game had ended, I noticed one of the actors is wearing a Michigan sweatshirt. Look closely during the scene when Harry’s tongue is stuck to the ski lift and you’ll see him. Go Blue!

Andrew Luck, Robert Griffin III, and Brandon Weeden tied for fourth in the country last season with 37 touchdown passes each. All were selected in the first round of the NFL Draft. So how did the new quarterbacks at Stanford, Baylor, and Oklahoma State perform on Saturday? Josh Nunes was 16-of-26 for 125 yards as Stanford snuck past San Jose State 20-17. These two teams opened against each other last season and Stanford won 57-3. Nick Florence did his best RG3 impression, throwing for 341 yards and four scores while rushing for 24 yards on three carries in a 59-24 victory over SMU. And true freshman Wes Lunt was a perfect 11-for-11 for 129 yards before giving way to two of his back-ups in the rout of Savannah State.

Houston, we have a problem

Life after Case Keenum did not go so smoothly for the University of Houston. The Cougars lost 30-13 to Division I-AA Texas State. The performance was so bad that after the game, first-year offensive coordinator Mike Nesbitt resigned. That is not a weak attempt at a joke but an actual news item. “We wish Mike the best in his future endeavors and thank him for his contributions to the Houston program,” head coach Tony Levine said. What contributions, exactly? That time he designed a play that looked totally sweet in spring practice? Houston had the best offense in the country last year, putting up 49.3 points per game. Not since Keenum’s freshman since had Houston ranked outside of the top 13 in scoring. Like I always say, once you get used to Keystone, it’s hard to go back to Milwaukee’s Best.

Things got pretty crazy in Dublin for the Notre Dame-Navy game, my sources tell me. Here’s a photo from just outside a pub, where many ND fans had congregated:

Moments earlier, that cow was inside the pub. And that’s not all. During the game, a man ran on the field and performed an Irish Jig on the goal line. Between plays in the third quarter, this guy was allowed to walk past the players and across the entire length of the field, unimpeded. It is possible the locals thought he was the Notre Dame leprechaun. Either way, it wasn’t until he finally decided to walk off the field that he was apprehended.

The Notre Dame players celebrated their victory by playing a variation of beer pong in their locker room upon returning to South Bend. Jake Golic, Mike’s youngest son, is the star of “Trick Shot Monday 2012: Purdue Week,” a title which implies this is a recurring event. Running back Cierre Wood may be suspended, but that doesn’t stop him from playing the part of sideline reporter; he continues with his questions, unfazed, even while a teammate notes Golic’s resemblance to Bradley Cooper. What I am trying to say here is that I miss college.

The game stories were fantastic

Northwestern beat Syracuse on Saturday with a last-minute touchdown, 42-41. My Twitter feed was consumed by commentary of this game, which makes sense: a ton of sportswriters and other media types went to these schools. According to Wikipedia, Northwestern’s Medill School of Journalism’s alumni include J.A. Adande, Rich Eisen, Mike Greenberg, Jon Heyman, Brent Musburger, Rachel Nichols, Darren Rovell, Adam Schefter, and Michael Wilbon. Syracuse’s Newhouse program boasts Bob Costas, Mike Tirico, Pete Thamel, Dick Stockton, and David Resnick, among others. If you’re wondering, this blogger got his journalism education from the streets. (The streets of Manhattan that is. At NYU. I took journalism classes at NYU.)

What are rankings supposed to convey? The best teams? The teams that have performed the best? The teams that have done well against a tough schedule? As long as there are preseason rankings, the polls are going to be severely flawed. Don’t worry, here at andrewjkahn.com we wait until teams have played games. Ideally, I’d wait until Week 4 or so, but I have to keep the masses happy. I considered only three things for my poll: margin of victory, strength of opponent, and what I’d anticipate the point spread to be should they play one another. I stopped after nine because there were no other impressive performances from really good teams.

Expect more-than-usual fluctuation from week to week because of my criteria. OK, time for my awards and predictions for Week 2. Please note there were no upsets within the top 25 last week so my 0-1 record comes with an asterisk. Please also note it took just one week for me to start making excuses.

Fun Fact No. 1: Texas A&M and Missouri are playing their first games as SEC members after leaving the Big 12. Missouri hosts Georgia while A&M gets Florida at home. By joining the SEC West, the Aggies have the pleasure of playing the last six national champions this season (Alabama, Auburn, Florida, and LSU).

Fun Factoid No. 2: LSU plays Washington this week and while there are many reasons to like the Tigers in this game, one is this: LSU has not lost a regular season nonconference game since 2002. The Tigers have only lost to one non-SEC opponent since Les Miles took over in 2005 (to Penn State in a 2009 bowl game, which has been vacated).

Fun Factoid No. 3: USC, which plays Syracuse in Metlife Stadium in New Jersey on Saturday, has only lost one regular season nonconference game since 2002 (to Notre Dame in 2010), a run more impressive than LSU’s considering the Trojans’ opponents. USC plays the Irish every year and has not shied away from home-and-homes with schools like Ohio State, Nebraska, and Auburn. Of course, USC is very good.

Kahn Family Smiles (one smile for each projected win between Michigan and Notre Dame this week):  🙂 🙂

Pet Fan of the Week: Hey, reader(s), didn’t you see my call for submissions last week? I need pictures of your pets showing off their love for college football! Since I didn’t receive any, I have to feature my own pet this week: Mutsy, an 11-year-old golden retriever who loves to bark at the television. 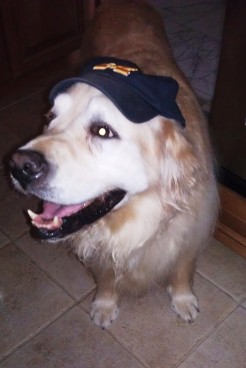