After the worst season in school history in 2008, the Wolverines are 3-0. For an alum like myself, it feels good.

The blowout victory over Western Michigan in the season opener was great — regardless of the quality of the opponent, it showed that the offense was at least competent this year. It showed that the defensive players seemed more aware of their assignments, even if they were sloppy at times. And most importantly, and this can’t be stressed enough after last season, it showed that Michigan has dangerous and effective quarterbacks.

That’s right, it took all of one week for true freshman quarterback Tate Forcier to win over the Maize and Blue faithful. He dazzled in his debut, throwing three touchdown passes and no interceptions.

One week later, he’d announce himself to the rest of the country.

Playing at home against then-No. 18 Notre Dame, Forcier led Michigan to a thrilling 38-34 win, taking the team down the field and throwing a touchdown pass with just 11 seconds left.

The win was Michigan’s biggest since Lloyd Carr’s final game, when the Wolverines sent out the longtime coach with an improbable bowl win over Florida. (Yes, there was the wild, come-from-behind win against Wisconsin last season, when Michigan erased a 19-point halftime deficit to win 27-25. But remember, Michigan went 3-9 last year. In the end, none of the games were “big.”)

Against the Irish, the Big House was rockin’ when Darryl Stonum took a kickoff 94 yards for a score to give the Maize and Blue a 14-3 first quarter lead; it was shaking when Forcier broke an Irish defender’s ankles en route to a 31-yard rushing TD in the fourth; and the stadium, new luxury boxes and all, almost crumbled when the freshman phenom found Greg Mathews in the endzone in the game’s final moments. 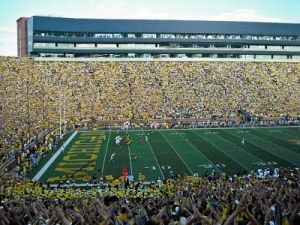 Michigan fans hope for a safety as Notre Dame prepares for a snap in the third quarter. Note the luxury suites that are still under construction.

In the opener, Robinson was electric. He ran 11 times for 74 yards, including a jaw-dropping 43-yard touchdown run. He didn’t see the field much against Notre Dame, but rushed for two more TDs against Eastern Michigan in a 45-17 win last week. He hasn’t gotten a chance to throw the ball too much yet, but it’s clear he has all the tools to be a star.

Is Michigan primed for a BCS bowl? Certainly not. Penn State and Ohio State are still a cut above the Wolverines, though Michigan does draw both those schools at home this season, so stealing a victory isn’t out of the question.

There’s no sense in looking even that far ahead though. A less-than-stellar Indiana team comes to the Big House this Saturday before Michigan and its many freshmen make their first road trip of the season, travelling to East Lansing to take on Michigan State on October 3.

Given the way it has begun, as long as expectations don’t get unreasonably high midway through the season, 2009 will likely be viewed as a success, a step in the right direction in Rich Rodriguez’s second season in Ann Arbor.

In the meantime, as the crowd chanted following the victory over Notre Dame: It’s great to be a Michigan Wolverine.

Michigan fans go wild as the players meet in the middle of the field to celebrate the win over Notre Dame.