Looking to rebound after a tough loss against Alabama last week, the Virginia Tech Hokies were expected to dominate against the Marshall Thundering Herd. In particular, red shirt freshman Ryan Williams was expected to perform well after gaining 71 yards and scoring two touchdowns against Alabama’s stout defense.

Marshall was forced to punt on six of its seven first half drives and struggled to put together a long, multi-play drive. Marshall finally broke through Tech’s defense on its sixth drive when Darius Marshall ran 61 yards for a touchdown. Throughout the first half, Tech’s defense maintained pressure on Marshall’s QB Anderson and locked up the Thundering Herd running backs.

Virginia Tech punted on its first drive that included Tyrod Taylor missing on two deep passes. However, Taylor got the offense going with a 46 yard run on their second drive. Unfortunately for Tech, Taylor’s accurate but soft pass into the end zone was intercepted by a diving DeQuan Bembry of Marshall.

Virginia Tech broke the scoreless tie on its third drive when it scored on the first play from scrimmage with an electric 57 yard TD run from Ryan Williams. Virgina Tech scored again on its fourth drive that was anchored by Tyrod Taylor throwing accurate passes, running the option, and handing the ball off to Josh Oglesby and Williams. Williams finished the drive with a four yard TD run. 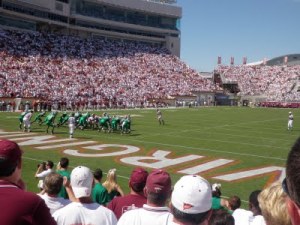 Tech broke the game wide open when Jayron Hosley ran a punt back 64 yards untouched for a touchdown; to make it 21-0. After being forced to punt, Taylor completed a 43 yard pass to Danny Coale and Williams subsequently punched it in with a 28 yard TD run. Tech finished the half up 35-7 after a final drive that included a successful fourth down attempt and a 21 yard TD pass to Dyrell Roberts. With the game in hand, I turned my eye to the Notre Dame vs. Michigan game.

In sum, Virginia Tech’s passing game started slowly but established a rhythm by the end of the first half. Tech’s option and running games consistently found holes in Marshall’s defense. Specifically, Ryan Williams tore up Marshall’s defense with 164 yards rushing and three touchdowns. Tech needs to continue improving its passing game so that other teams are unable to apply extra attention to its running game. Nebraska is sure to key in on Williams and force Taylor to throw it more than he had to against Marshall. Finally, Tech’s defense and special teams look ready to go against the Cornhuskers.